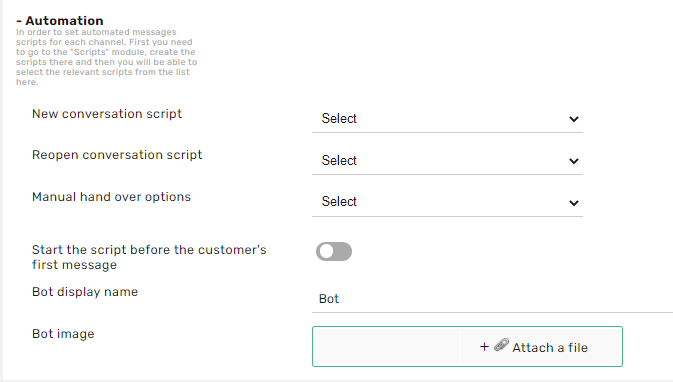 A script is a bot with a specific purpose, and each script meets a particular need, which is why you can define different scripts in different scenarios.

New conversation script - the bot that will be triggered when sending the first message. This script will appear in each new conversation on this channel.

Note: If the Split Conversation settings in the channel are always set to open a new conversation after it has been handled (possible), this setting will be irrelevant because the customer always comes to the opening script and not back to the conversation.

Manual handover options - allows multiple selections of several scripts. Each script selected here will be displayed in the assignments menu on the item, and the agent will be able to select a dedicated script in real-time manually.

For example, a script that meets the specific need X is defined here. The agent talks to the end customer and discovers that the customer can be transferred to a dedicated bot that can complete the task instead of fulfilling the need manually.

The agent selects the relevant bot from the assignments list and transfers the handling of the situation to the bot.

In the following screenshot, you will see that the agent clicks the Assignment Menu (the round mark on the right side of an object), then the first selectable option will be the scripts you have selected.

Start the script before the customer's first message - Defines whether to display the script message first or wait for the end customer’s response and then display the bot.

Bot Image - Displays the bot image defined here while the conversation is assigned to the bot in auto status.

Was this article helpful?
Thank you for your feedback! Our team will get back to you
How can we improve this article?
Your feedback
Comment
Comment (Optional)
Character limit : 500
Please enter your comment
Email (Optional)
Email