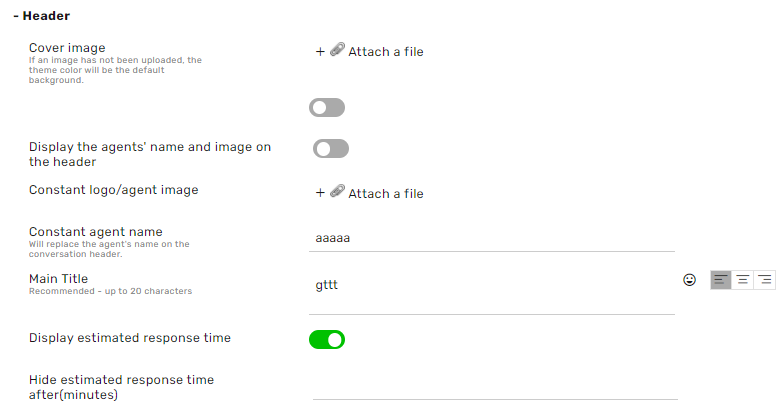 Cover image - If an image has not been uploaded, the theme color will be the default background.

Accessibility icon - toggles on/off the display of ease-of-use options for the visually impaired.

Display the agents' name and image on the header - if activated, this is where the agent’s photo and name (as seen in the General Settings tab) will be displayed.

Constant agent name - Will replace the agent's name on the conversation header. Often customers emphasize the name of the team and not the agent’s name, perhaps because another agent may have been responsible for handling the specific issue.

Main title - the main title appearing on the top panel of the Chat window (up to 20 characters).

Display estimated response time - display the estimated waiting time to the end customer (the feature knows how to distinguish between days).

For example, the estimated waiting times for Sunday will differ from Monday. This feature knows how to calculate other average waiting times for the various days for an extended period (even if possible), which will appear only after receiving enough information.

An algorithm does the calculation of the estimated waiting time, and it is not possible to input it manually.

The wording of the text is permanent and not possible to edit. It is “answering within __ normally.”

Hide estimated response time after (minutes)– if the estimated waiting time is longer than what’s typically defined here, the time will not be displayed.

Was this article helpful?
Thank you for your feedback! Our team will get back to you
How can we improve this article?
Your feedback
Comment
Comment (Optional)
Character limit : 500
Please enter your comment
Email (Optional)
Email